The calorimetry requirements at the future colliders' experiments are a challenge for the detectors’ development. New concepts have to be proposed and dual/triple readout calorimetry may be one of these new concepts. It basically involves the separate detection of the electro-magnetic (EM), hadronic and neutron components of the hadronic showers. Scintillating materials are good candidates for this new concept.

In present calorimeters, the total energy deposit is measured globally and little is known about cascade mechanism occurring during the energy deposition of the particles. Identifying the nature of the hadrons interacting with the calorimeter, reconstructing the path they followed and understanding the physics that generated them is a major challenge that would lead to a significant improvement in the energy resolution of future high energy colliders. Discriminating the shower components based on the nature of their interactions (electromagnetic or hadronic) is one possible approach. For non-compensating detectors, one major contributor in the energy resolution degradation is the higher sensibility to electrons, as compared to hadrons. Therefore, being able to determine, event by event, the electromagnetic fraction of the shower would allow improving the hadronic energy resolution. It has been shown that the simultaneous recording (dual readout) of the scintillation light (proportional to the total energy deposited by the shower particles) and the Cherenkov light (produced by the relativistic shower particles) allows determining this electromagnetic ratio.

A novel concept of dual readout hadron calorimetry based on non-intrinsic scintillators assembled in metacables is presented here. The detector is made of fibres with uniform radiation length, Moliere radius and interaction length but different functionalities. Part of the fibres are measuring the total energy deposition (material doped with scintillating activators) while the others detect the electromagnetic interaction of particles (detection based on Cerenkov signal in the undoped material). As host material, Lutetium Aluminium Garnet (LuAG) receives special interest because of its excellent properties. This material combines a high density (high stopping power), a high refraction index (strong Cerenkov signal) and good doping capabilities (fast and intense scintillation). In order to produce fibres out of this material, the micro-pulling down (µPD) technology was selected. It produces elongated crystals of small section that are already in their final shape and therefore the time consuming cutting steps needed for conventional crystals are avoided.

The Crystal Clear Collaboration is currently working on new materials and new concept based on meta materials. 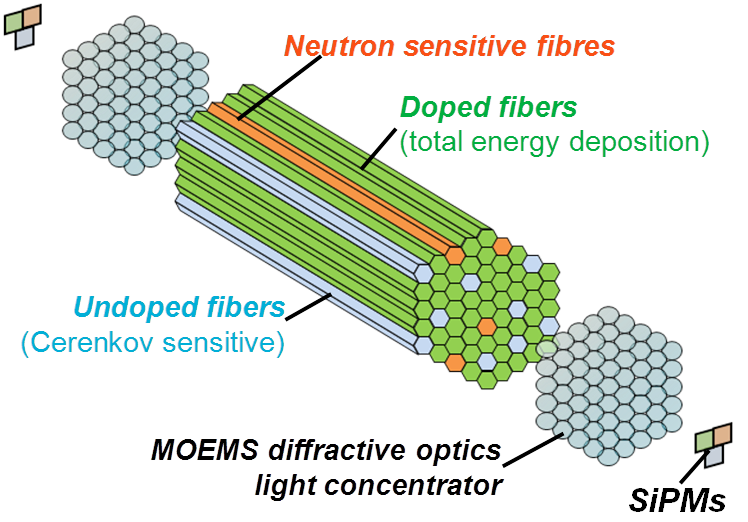